All Kinds of Updates!

First of all, thank you to all of you who are praying for my friend. He's doing better than could be expected, but he has a long road ahead of him. As of Sunday he'd had two surgeries on his legs, and was facing several more possibly this week. It's going to be a while before he can walk again, but doctors are cautiously optimistic that while he may not be back to 100% after he's recovered, he can at least be in the 90% range. Hopefully I'll be able to visit him and see him this week (one time he was in surgery, the other time he was asleep).

Second, I finally have some stash usage to report! Stash Report 10:

I'm still not in the black, but I finished a quilt top and pulled a backing. Plus then I'll have to bind it, which will use up the last of those fabrics. Want to see my finished quilt top?

It's the Brown Bag Quilt top, and I finished it Saturday morning while my husband was playing basketball with some friends. I'm rather happy with how it came out: 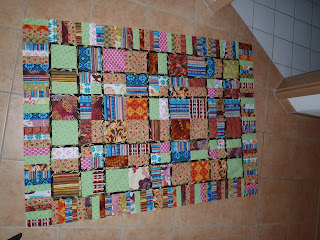 It's a bit of a bizarre angle on the picture, but you get the idea. It's a crazy quilt in that the fabrics in it are all rather loud...but I love the effect! My husband was surprised at how...not horrible it looked when I finished it. I'm still unsure of how to quilt it, and I still have enough of the fabrics left to need to figure something out quickly. I'm backing it with a piece of one of the sheets I bought a few weeks ago (it's big enough to fit the quilt and I'm running out of time, so that decided it!), so maybe I'll cut it somewhere and add a piano key strip (like the borders) in there? I've got too much of the fabrics to just use them as binding, so that's probably what will happen. Wahoo!

I also started playing around with free-piecing Sunday night. I'm waiting for batting to arrive for the BBQ (haha, not barbecue!), so I started on another project: a doll quilt for a very special little girl whose family just moved away. She wanted it to be kind of beachy, so my first free-pieced thing ever (possibly for her doll quilt)  is this little guy...yes, I found Nemo! Or rather, I made him. 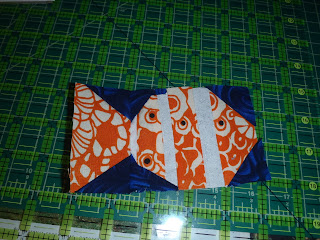 He isn't perfect, but I think he looks pretty good considering he's my first attempt at free-piecing! The tail is a bit big for the body but I like him anyways. :)

What do you think? I'd love some feedback as my husband doesn't know much about free-piecing...
Posted by Emma at 21:19 4 comments:

A college classmate/colleague of mine was in a car accident last night. He should have just gotten out of surgery a few minutes ago, and hopefully we'll have more information on his condition soon. From what I was told, his legs were crushed and the doctors expect him to be in the hospital for at least a month. Please pray for his healing, and that he'll have full use of his legs back soon. We're all very worried about him, and hope that more information will come out soon.
Posted by Emma at 10:10 3 comments: