A Finish for a Very Special Girl

I am very pleased to announce a very special quilt finished for a very special little girl - my neice, who I called neice Quiche in my last post. I finally finished the quilt and got it sent off to the wild world of Wisconsin, where it has been very warmly received...and I'm super excited to show it to all of you!

Neice Quiche has been very long anticipated and finally arrived this past December (I know, I'm a bit late on this quilt). When my sister found out she was expecting, she and her husband made a deal that allowed him to pick the nursery theme (before they knew gender) and he decided vintage Star Wars. I was SO excited they kept the theme even after finding out they were having a little girl...and so I got around to designing a vintage Star Wars baby quilt.

I did a quick search on Pinterest for Star Wars Quilts and found a pin that linked to Andy Rash's Star Wars pixel art and I was totally hooked. I drew the characters on graph paper, cut them out, and moved them around until I liked the design (with the hubby's help to try to make them all fit). I had decided on 1.5" strips unfinished/1" finished and the size had to fit on the Warm and Natural crib-size batting (package says it's 45x60).

At first, I was afraid of the design - the characters had enough overlap between them that I was envisioning Y-seams and other terrible things (hey, I hate them...if you can do them, the more power to you!)...until my husband pointed out that I could just make blocks of a fixed size and the characters would still come together in the end. Duh!

To make the quilt as best I could, I used my Go! Cutter to cut 1.5" strips, then sewed those strips into the most common strip pairs I'd need for any given block. I then sub-cut those strip pairs down into doublets - two 1.5" squares sewn together, not pressed. I pressed the top seams of each block to the left, the next row to the right, etc. so they would nest well; waiting to press the sub-cut seams helped all of that lay nice and easy for me.

Overall, I definitely bought too much of the solids, but they'll get used in the future, I'm sure. This quilt was fun, if a little finicky to get all the seams to match. After all, it contained 2,240 squares in total, and getting that many to match up...isn't necessarily impossible, but definitely difficult.

The backing was Timeless Treasures Fairy Tale Mini Stars Fuschia. I bought 3 yards and it worked well - I had a few strips left over from each side of the quilt but not too much. To bind the quilt, I opted for a navy batik with a snowflake design left from Texas Mom's 4-Seasons quilt. I think I got it from Fat Quarter Shop, but I'm honestly not positive because it was bought in 2010. I picked this print because neice Quiche is a December baby, and my sister's wedding was in December - her colors were blue and silver and she had lots of snowflakes in her decorations. I liked that the binding tied that in there subtly.

I quilted in a squared-off spiral so the quilting would go through every square of fabric (gotta help reinforce those seams for baby quilts - they'll get spit up on and need to go through the wash!). I randomly quilted a few stars throughout, as you can see in the character shots below. For the two ends of the quilt, I just quilted straight lines (the rectangle meant that I ran out of width to quilt before I ran out of length) to make the eye think that the spiral was still going.

Pictures from before I sent it off (this is bigger than my usual quilt, so I had to stand on the couch and get pictures of it on the floor):


And now a few pictures of the quilt in action, used with permission from my sister: 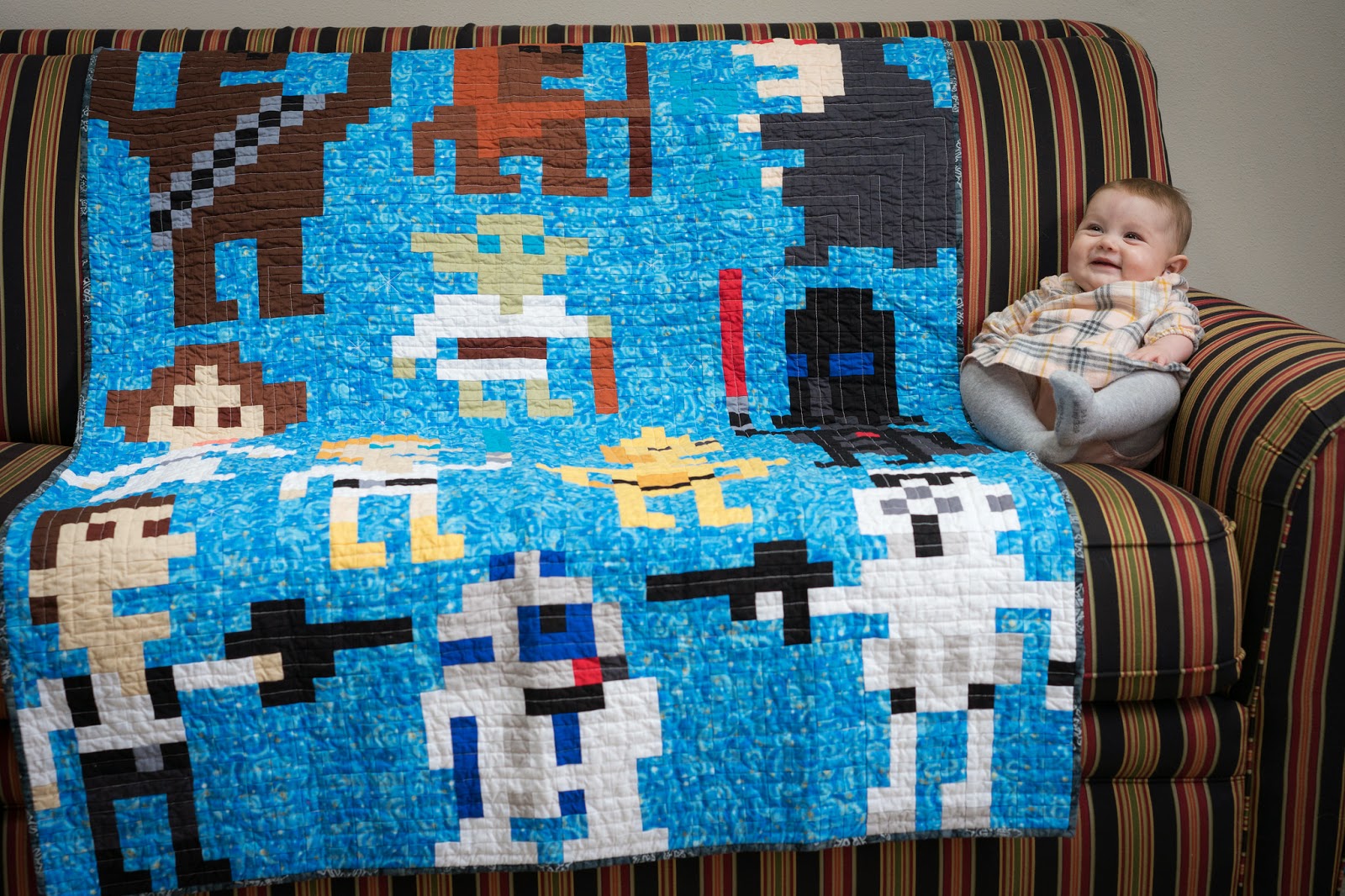 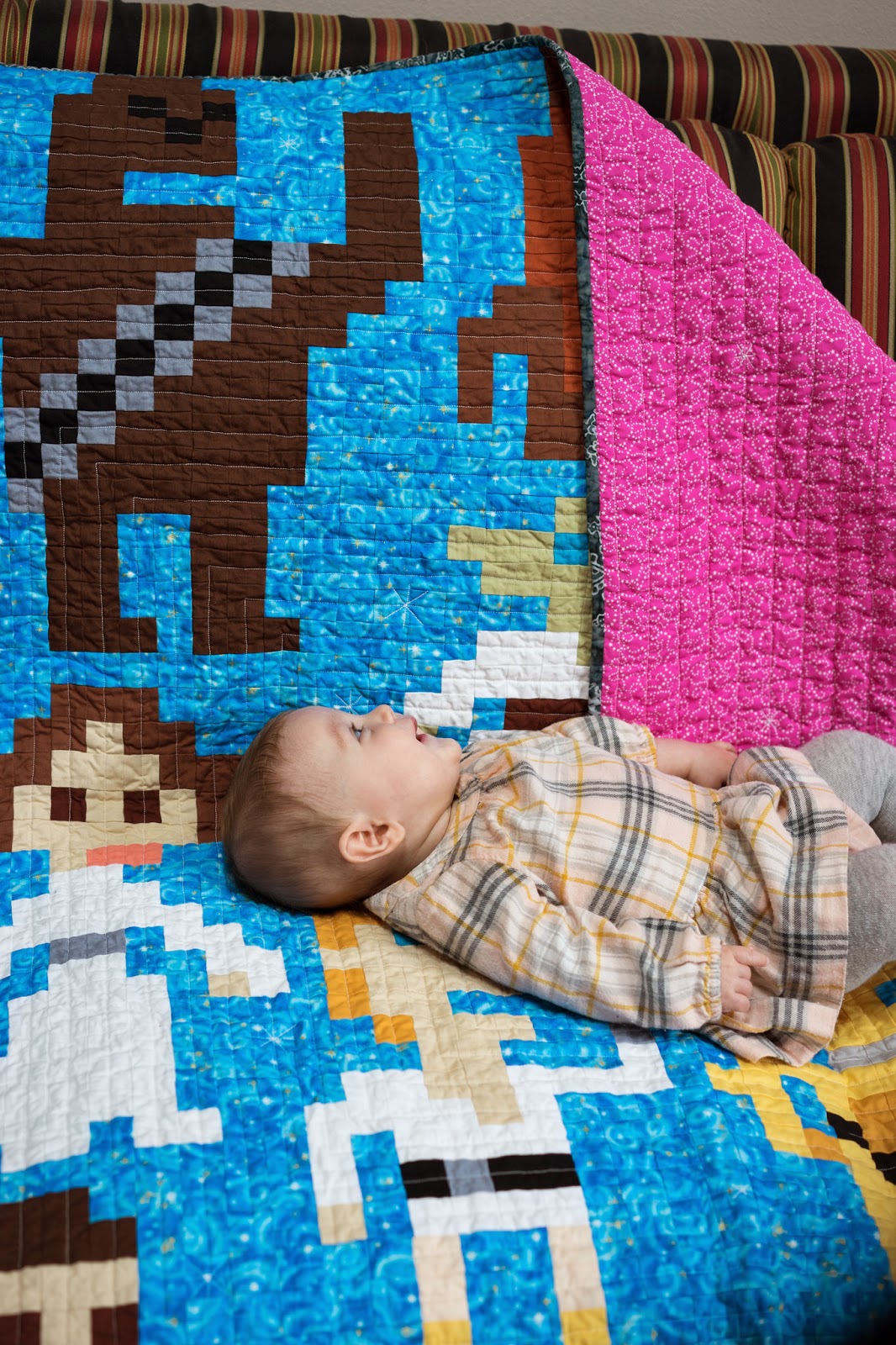 I absolutely love the location of the characters. The droids, just like in the movies, have managed to get in the middle of the battles. Luke and Han are both trying to protect Leia, Chewie is throwing up his arms and doing the noise he is so known for, and the Ewok is getting into trouble as always, unaware of how tiny he is. Yoda is even almost standing on Luke's shoulders.

Stash Report, linking up with Judy L. of Patchwork Times whenever hers goes live: