I just posted this over at Prairie Moon Quilts, and for accountability, I'm posting it here. Shelly does a Weekly Challenge, where she posts a project that she'd like to get done, and then updates everyone on her progress the following week. I'm thinking that might be a good idea for me - that way I can hopefully get more done on all of my projects! So, without any further ado, here's what I told Shelly:

Hmmm…maybe I should try these Weekly Challenge things. Let’s see…for this coming week, I want to make progress on both my Mom’s quilt (I hope to get it done by Christmas, although I always bite off more than I can chew) and Heather’s baby quilt. Heather’s baby was due on the 10th of September, but as of the 21st hadn’t come yet. I haven’t heard if he’s here yet.
For quantifiable stuff…I want to finish both square #29′s quilting (almost there already) and #30 (it’s just one more square…a few hours…or a few movies! of time hand-quilting will get me there). On Mom’s quilt, I’d like to complete at least another 6 leaves. Granted, I may be able to accomplish both of these goals this weekend, but I’d rather get more done than my goals than less.

I wondered whether I had bitten off more than I could chew, so to speak, after I posted this. But then Saturday happened. On Saturday, I managed to round out the number of completed leaf blocks to 15, and by Sunday I had 20! Aren't they pretty? 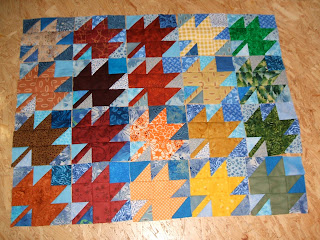 The colors aren't quite right. I tried fixing them to no avail. The middle leaf on the bottom row is a bright tangerine, and the top row's second leaf from the left is a bright yellow gingham. The one that looks black is a beautiful not quite black burgundy color.

I finally figured out the secret to these blocks - a SCANT 1/4" seam. It's solved just about all of my problems. My other solutions were to mark lines for where I should sew on my HST blocks (instead of relying on what I think 1/4" looks like), and then...the stem blocks...if you're making stems for your leaves (which I think they look funny without), draw a diagonal line from corner to corner of both sky blocks. Line the sky piece up corner to corner with the stem fabric. Then don't sew on your line. Seriously. Sew between 1/16" and 1/8" outside of that line (towards the corner, so as to make the stem itself bigger). You'll probably have to trim off small slivers of sky fabric after you iron the block, but following that advice will make your life ten times easier at a minimum.

While I'm on the subject of those stem blocks, don't forget! You'll be cutting off a triangle of each fabric, so make it into a small HST! Here are my little guys (they're really little...the biggest one is 1 1/4"-ish...I free-hand the seam for these little ones so some are bigger, some are smaller, some are more rectangular, etc.). I think I'm going to foundation piece them (like making a string block...sew them down to a piece of muslin, so that they're strengthened as they're going to end up SUPER tiny) and use them in my back somewhere. 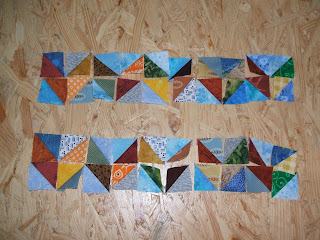 They're cute, and I think I like the zig zag pattern for them. Although I'm not sure how I'm going to fit in the leftover HST blocks from the leaves that don't have blue sky behind them (there are some on the grass or against the tree). I guess I'll figure it out! I just think those little guys are adorable, but I'm sure they're going to be absolutely awful to sew. Oh well, can't win them all!

Not much else has been going on...I've had to go in early and stay late both days this week, and I have to go in tomorrow but I shouldn't have to stay late. I hope. I do, however, have church band practice tomorrow night so I won't even be home until almost 9 most likely. Oh well...Friday is coming soon. And it's payday this week. And my husband will be home in about a month and a half!

As for the hand quilting, I have finished quilting block number 29 and have started 30. I'm about halfway done with 30, but I didn't touch it today. I watched a movie while eating dinner and had ample time to work on it, but my eyes were killing me (cleaning fumes at work from the bathrooms getting a thorough scouring) and I just didn't feel like working on it. That's strange for me...quilting usually calms me down, but tonight all I wanted to do was wrap myself up in a blanket and watch my movie. Which I did. In my defense, it was 69 in my house when I came home...and the heat was on. I'm still figuring out what settings I need to use on the radiators and heated floors to keep the house comfortable. While watching the movie, the house cooled down another degree, so I'm going to have to go turn the radiators up probably half a setting. I don't mind the house not feeling like an oven, but I want it to at least maintain 70 no matter what. When it gets colder (today got up to almost 50 in the afternoon, although it was drizzly), I'm going to have to warm the house even more! Yikes! My heating bill is going to be a bit higher than I'm used to (moving from the Southeastern USA to an area more northerly than the US/Canadian border will do that to you!). I foresee lots of nights curled up, hand quilting underneath my BIG hand-quilting project and drinking hot chocolate in my future. :)

What's YOUR favorite thing to do in the fall/winter?
Posted by Emma at 21:21