The Brown Bag Quilt (plus a long-overdue stash report!)

If you were paying attention to the sidebar on my blog, you would have noticed that the Brown Bag Quilt (henceforth in this post known as the BBQ) is listed as a 2011 finish. I got it done on the very last day I could have and got the pictures posted to the flickr group. But life happened (I went to a ball, went on a marriage retreat, and otherwise stuff just got in the way) and I never posted here about it! Shame on me...but over at the BBQ Blog site, they said "We would love for each winner to comment and leave a link
to their blog so we can follow any other fun information and photos they might have gathered during the months the contest was going on.  "

Now, if you remember, this was the pile of fabrics I started out with: 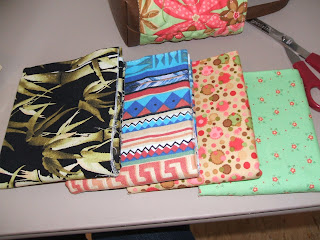 A little crazy, right? My thinking was to use the black entirely for sashing since it was so much darker than all of the other fabrics and it stood out...a lot. But with the other ones, what to do? I settled on a disappearing 9 patch design, but I would sash in between the 9 patches with the black, and then maybe sash between the cut up pieces, but that was dependent on how much of the black I had left. These each were half a yard of fabric, and as I found out, it's not much when you're trying to use that much sashing (even if you do cut it to 1" before using it!).


As for adding in fabrics, I wanted to downplay the large-scale prints so I pulled the biggest prints I had. After all, using small scale/solids would emphasize the crazy print combinations I had, so I went big. After all, go big or go home.

Then I cut. And sewed. And cut. And sewed. And didn't take pictures of any of it. I know. I'm bad. I improvised a lot so I could use as much of those fabrics as I could...the rules of the challenge said you had to use 90% of the fabric you were given. So extra bits from the cutting became a piano key border around the outside of the top. When the top was done and I just had to choose a backing, I grabbed one of those old bedsheets I bought at the thrift store! I bought them despite the fabric diet...but almost 7 yards of fabric for about $3? Exactly. But to tie it into the front (since it wasn't included in the front at all), I cut it diagonally and inserted the leftovers of the piano key border going through the back.

I quilted the quilt in a kind of plaid way. I quilted a line 1/4" to one side of a black sashing line all the way down. I quilted a second line about 1/4" to the side of THAT line. I did this on both sides of all of the black sashing. Then in the border I just quilted in the ditch between the piano keys. I bound it with leftover strips of the focus fabrics and that was that. 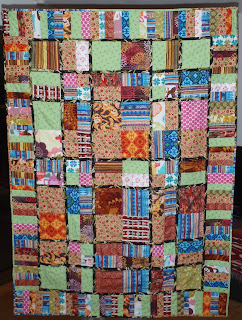 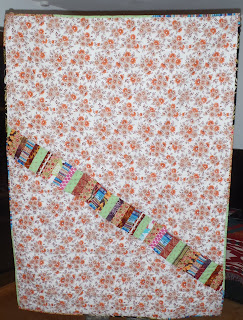 Texture shot to show off the quilting a bit better (I usually understand pictures better than descriptions...and I'm sure I'm not the only one): 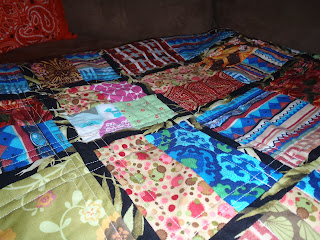 As you can see, a ton of crazy not-really-matching fabrics in there...but they match because they don't match! Right? ...right? Beyond the pictures, the thing this quilt really taught me is that I don't pin enough when I baste quilts. Because this was an interlocking sort of quilting design, there are quite a few small puckers all over the quilt where two lines intersect. It's not really noticeable unless you know to look for it, but lesson learned. Pin like it's going out of style.

I have no idea yet who this quilt will go to...one of my husband's coworkers is expecting he and his wife's second baby but they haven't found out the gender yet. If it's a girl, this one will go to them (because they're supposed to be moving in two months and I wouldn't have time to get another one done for them). If not, it'll probably go to a charity like Quilts for Kids.


This report estimates the following:

1 yd - piano key slash on the BBQ + binding, 164 2.5" squares for Thomas Knauer's No-Repeat Scrap Vomit Quilt (isn't that name AWESOME?), playing around with a few random strings and crumbs to make two crumb blocks and four string blocks...none of which I like and which I will probably offer to anybody willing to give them a good home at some point here in the general future
2 yds - finished quilt top, will be posted later
1/2 yd - binding for the hand-quilting project that's been quilted
1/2 yd - top, back, binding of the Nemo quilt

Not bad...and I'm almost back in the black! That being said, there may be a TON of fabric coming into my stash next month (not because of me...but my anniversary is coming up and hints have been dropped) so I better get sewing!

And, if you've gotten this far (which I do appreciate!), answer me this one question: How do you stretch your quilt backing, batting, and top out when basting (for sewing on a domestic non-longarm sewing machine) so that you don't get mini puckers when you quilt in any sort of intersecting pattern?
Posted by Emma at 17:51