Is it already Sunday?

Have you ever had too much week and not enough weekend? Yeah, me too. This week was no exception...I think I need a weekend for my weekend! But I do have a lot to look forward to this coming weekend! My parents are coming to visit...I haven't seen them in person since June, although we do Skype regularly! They'll only be here for a few days on the tail end of a business trip for my dad, but I'm so excited to be able to show them around Germany! My mom's never been outside of the US and Canada that I know of, so this is her chance to try out her new passport! She was going to go to Germany last year but the Icelandic Volcano (I'm not even going to try to spell its name) cancelled that trip.

I'm turning to you, bloggy friends (I know you're out there, even if you are quiet!) to help me through this week. My husband's company is going for a trip to Normandy this weekend and so he left tonight. Yes, it's Mother's Day, but we don't have any kids so it doesn't really count for us. After all, you kind of need to be a mother to celebrate Mother's Day, right? Well, not at church today. To try to be sensitive to women who may be trying to conceive but not having luck, flowers and muffins (96 of which were baked in my kitchen by my husband and two friends on Saturday afternoon and night) were given out to every adult woman. I don't know...it seems like it might be a little overkill to me. And then there was the debate with my husband afterwards. So tell me this - the pastor at the beginning of the service asked any woman who hadn't gotten a flower to raise her hand, but none of the women did and their husbands either had to point to them or raise their hands for them. Do you think that the women were being selfish and wanted their husbands to do a little more work to get them a flower? Or do you think that the women just didn't want to make a fuss about it then and that they would get their flower after service? My husband thinks the former and I think the latter. Anyways...I seem to be going off on rabbit trail tangents a lot right now...I hope you can follow the popcorn popper that is my train of thought!

While the guys were making a mess of my kitchen (you should have seen the state of my stand mixer this morning! Dried blueberry muffin batter in the part where the bowl hooks in! Seriously?), I was cutting and sewing. I pieced the back for the newest quilt I've been working on. It's for my friend Kate, who is due June 1 (so it's not late yet!). The front is a simplified Bento Box Quilt that is just a square in a square (not wonky), not a multi-leveled square. It's for a little boy so it's all bright reds, oranges, yellow, blue, and green on the front and the back is another of the sheets that I used to back the Brown Bag Quilt. I cut this one horizontally and put in small pieced square-in-square blocks in a double row close to the bottom. It helps to tie the back (orange and khaki flowers) to the front (bright Bento). I could have bought another back for it but it would not have gotten here in time for be to be quilting it by now! I am proud, though, because all of the squares on the back are 100% out of my strips and crumbs and scraps. That makes me happy, although I don't think it's made a dent in the least! Every little bit helps, though. So here's the quilt all scrunched up in my Jenny Janome! 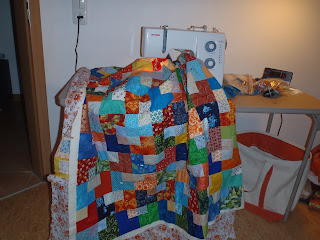 And here's the back - the quilt is not straight, which is why the stripe of little blocks looks diagonal...it's definitely straight across (or close to it!): 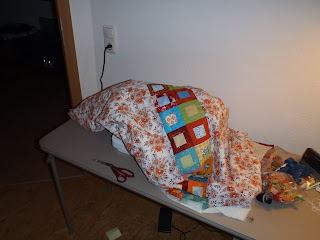 I spent yesterday sewing with some dear old friends: Evelyn, Ninny, Ruth, and Idgie, Lizzie, Jane, Mr. Darcy, and Mr. Bingley, and Christine, Raoul, Meg, and the Phantom. So did you guess which movies I was watching correctly? I love those movies...I've watched all of them probably dozens of times in my life so far, much to the annoyance of my husband. I love watching my favorite movies over and over and over again (I've watched Fried Green Tomatoes probably 5 times in the last month alone) whereas he watches them, appreciates them, and puts them away. I can't just put them away, though! They're like old friends! And every time you see them you catch something new...like realizing that Raoul knew that it was the Phantom with Christine on stage during the showing of Don Juan Triumphant based off of his facial expression, or noticing the exact moment when Mr. Darcy falls in love with Lizzie. Yes, they're old friends, and the more you spend time with them, the better you know them.

And then the last bit of fun stuff for this post - the stash report! Did I make it back into the positives yet? Let's go see! (I'm such a cheeseball!)


Woo-hoo! I'm back in the black! It took me long enough, and I think I'll be negative again here before too long, but I've officially used more this year than I've added. It feels great.

This reports includes the pieced backing on Kate's quilt. I haven't done anything beyond that. And I won't be doing any major sewing next weekend so hopefully I can stay in the black, but my anniversary (the big 2 year mark!) is the 23rd, so my report may sink back into the negative again...
Posted by Emma at 21:04