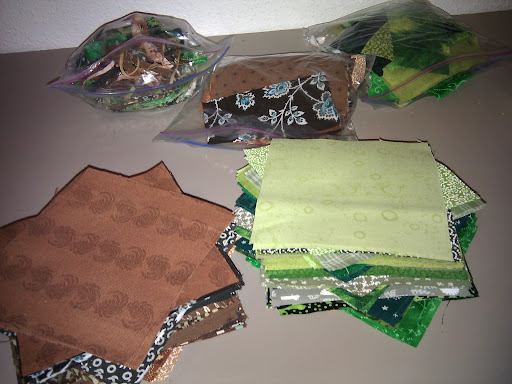 What you see here are stacks of 108 green 4.5 inch squares and 108 brown 4.5 inch squares. Oh, and the bags of scraps from cutting said squares. Aren't I organized? Haha, yeah right... you just can't see the rest of the room, or the rest of my house for that matter!
The bag on the left is my bag of future stuffing. Up until very recently, pincushions were stuffed with pieces of thread too small to sew with, or fabric bits too small to be sewn into a quilt. I really hate wasting, and I don't usually have anything for a leaders / enders project, so my thread snippets and those super-skinny fabric bits from squaring up that block for a quilt go in there. I might also put it outside next spring for birds to use in their nests. I just don't want to buy stuffing if I already make it every time I sew, you know?
Back to Pop-Pop's quilt, though, having my iron right next to my sewing table made cutting so much easier. Some of you may laugh at that, but this is the first time I have had a whole room just for my sewing. Being able to immediately press a wrinkly fabric before cutting is a bit of a luxury for me.
Those stacks are very organized to make the sewing process easier. All squares of any individual fabric are together, and they are subdivided into smaller stacks of ten. All of each fabric may not be in the same group of ten, but they are still right next to each other (as in, if a fabric is on the bottom of one stack, more of it might be on the top of the next stack).
This organization helps with my piecing method for this quilt: the random number generator. Yes, I am a nerd. I start with the generator picking from 1 to 108, and whichever fabric it chooses, I use so long as it is not already in that square. The next time I take from that stack, the generator picks from 1 to 107,and so on. For ease of counting, I shuffle the "one less" up through the stack so that like fabrics stay next to each other and as many stacks have 10 squares in them as possible, effectively leaving one less square in the top stack. It's a bit more time consuming, but the nerd in me is absolutely jumping for joy. Nerdy math and computer stuff plus quilting equals a fully satisfied quilter and a fully satisfied nerd. It has tried to make several repeats already, and my most plentiful brown has been used in all but one 9 patch so far, but my most plentiful green still hasn't been touched yet. I am really curious as to when that green does finally get used.
I'll keep ya'll posted on my progress!
Posted by Emma at 22:33