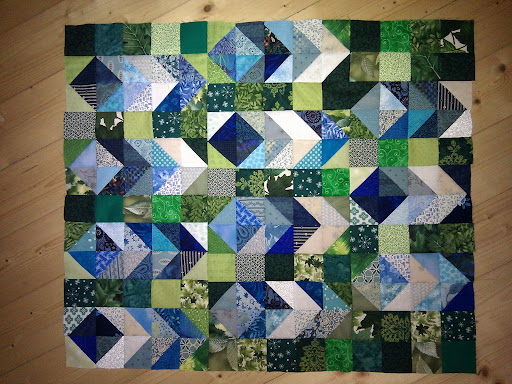 To start off with, I've finished the bluebonnets for Texas Mom's quilt. Aren't they pretty? I haven't figured out how I want to quilt them yet but I still have a little time before that's an issue. I feel almost a little guilty because I've been invited to guest post on the Slow Poke Quilters blog but I feel not quite so slow this week. Oh well!
Now for my crazy side. I did something today that I haven't done in months: I threw away perfectly good food. It wasn't moldy and hadn't yet spoiled. But I dreaded eating it like the plague. It started its life innocently enough. Tuna casserole from scratch doesn't sound evil in the least. But I tried doing it without a recipe and that's where the casserole turned evil. I didn't make enough of the creamy sauce, or maybe I just used too much tuna or added too many vegetables. Whatever the reason, this casserole went the way of Darth Vader: it turned on its old teacher. But unlike Obi-Wan Kenobi, I was able to take its evil out with only a bit of a guilty conscience. The frugal side is throwing an all out hissy fit over the whole thing, but even she can't look a can of tuna in the eyes right now.
And so now that you probably think I've totally gone off the deep end, I'm going to sign off with the promise that the pan that once held the tuna casserole will, by the end of the weekend, hold something much yummier - my mother in law's cranberry date bars. I promise to use a recipe to make them too.
Posted by Emma at 22:06